Nuremberg/London, 27/02/2018 – The international affiliate marketing network Webgains recorded an increase in revenue of 17% to EUR 51.4 million in the past fiscal year (2016: EUR 43.9 million). Adjusting for fluctuations in exchange rates, the growth rate is as high as 22%. In terms of individual markets, German speaking markets (central Europe) once again are the biggest contributor to growth, with an increase in revenue of 149%, followed by Spain (+30%) and the US (+18%).

According to a study published by Forrester in 2016, the affiliate market is expected to grow at an average annual rate of approximately 10% until 2020. The German Digital Industry Association (BVDW) predicted a similar growth rate of 9% in August 2017. In comparison, Webgains grew twice as quickly as the market in the past fiscal year. The large increase in revenue resulted from the positive development of existing long-term customers. The company was also able to acquire a number of new customers due to market consolidation. Webgains expects this trend to accelerate even further in the current fiscal year.

‘Our success over the last fiscal year demonstrates that we have been able to assert ourselves in a market environment that has been partially shaped by an M&A-driven reduction of affiliate platforms. We are optimistic that we will continue to grow in the future and further benefit from the consolidation of the market,’ says Jens Körner, CEO of the ad pepper media group.

About Webgains
Webgains was founded in 2005 and has been part of the ad pepper media group since 2006. The company, which is part of a global network, is headquartered in London. Additional locations include Bristol, Nuremberg, Paris, Madrid and New York. However, the reach of the Webgains network stretches far beyond these locations. The company provides localised platforms in 14 countries and reported sales in more than 150 countries in 2016. In 2017, Webgains invested in its technology and became the first affiliate network in the world to enter a partnership with IBM Watson. The aim is to let performance marketing benefit from the advantages AI and machine learning offer. Webgains’ vision is to make affiliate marketing intuitive, predictive and proactive with the help of cognitive technologies and strategic services. www.webgains.com 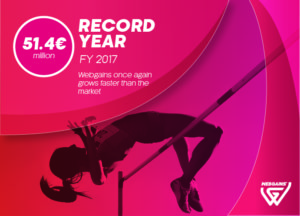